Countdown to Song of Ireland

Ten days from today, my novel Song of Ireland releases to bookstores!  To celebrate, I have decided to launch ten days of  "Tips and Tales from Ireland." Each day I will post either a story or a travel tip, culminating in a book giveaway and an additional surprise on day ten.  So here we go:

Megaliths abound in Ireland; often you will find a dolmen or sarsen circle in a random location - a field punctuated with wildflowers, for example, or right in the middle of a herd of cattle.  But did you know that many Irish sites, like the tombs at Newgrange, Knowth and Dowth on the Boyne River may actually pre-date the pyramids of Egypt.  Newgrange, for example, was built somewhere around 3200 B.C.  We know that such sites were often used as tombs, or as calendrical markers for the passage of the seasons and years.  But who put them there and why?  That we do not know.

The dolmen featured on my book cover, below, is the Poulnabrone, sometimes translated as Hole of the Sorrows (or grief).  This stone passage was once used as a grave, probably surrounded by heaped up dirt and stones.  Indeed, excavations discovered the bones of some 22 people in its depths, some of them children, some with arthritis. The dolmen stands on the Burren in County Clare where the wild wind has scoured a doorway between this world and the next. 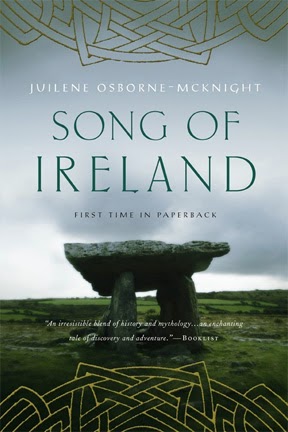